Where does the time go?

It's hard to believe it is nearly the end of 2021.  As we all know, Covid restrictions have made our lives very different, but staying safe is the most important thing we can do.

The restrictions have meant lots of home time and I have put this to good use.  A new collection is available now, Koi Ponds.

I have always been fascinated by Koi fish and the serenity of their environment.  The legend of Koi Fish even includes a dragon.

One legend tells us an ancient tale of a huge school of golden koi swimming upstream in the Yellow River in China.  Gaining strength by fighting against the current, the school glimmered as they swam together throughout the river.  When they reached a waterfall at the end of the river, many of the koi turned back, letting the flow of the river carry them away.  The remaining koi refused to give up.  Leaping from the depths of the river, they attempted to reach the top of the waterfall to no avail.  Their efforts caught the attention of local demons, who mocked their efforts and heightened the waterfall out of malice.  After a hundred years of jumping, one koi finally reached the top of the waterfall.  The gods recognized the koi for its perseverance and determination and turned it into a golden dragon, the image of power and strength.

Now I couldn't make koi ponds, as they are usually quite large to transport round to Art Shows, so I decided to make miniature ones. 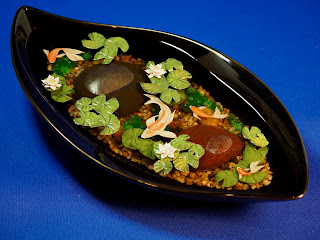 Each of my ponds contains koi fish, lily pads and lilies, all cut from metal and hand painted.  There can be up to 8 layers of resin and each one holds fish and some lily pads.  It has been a very good learning experience with the resin. 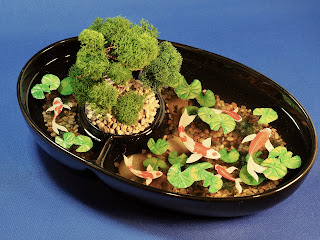 For this one I added a hand made bonsai tree
in the centre.

I was able to find some really interesting bowls for these ponds. 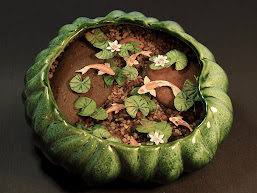 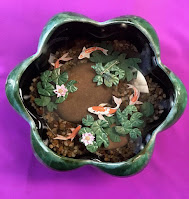 Of course, I couldn't leave it there, could I?  No, I wanted to find out just how small I could go with making a koi pond!!  Of course! - a pocket watch with the mechanism removed. 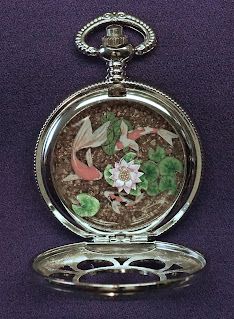 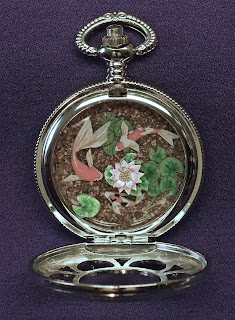 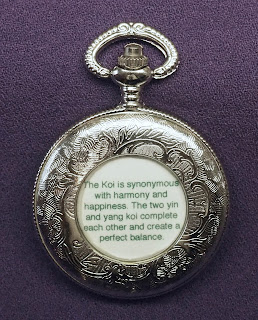 And, Yes, I am thinking about another way of presenting Koi Ponds.
Stay Tuned and Stay Safe!

If you would like to see more of my work please check out the following:

The Artful Dragon Studio Will Be Participating in the following Shows During 2021 (this will be updated regularly).

Before the Rush Show is only a few weeks away. It will be held at the Firehall Theatre in Gananoque on December 4 and 5, 2021. Saturday 10 am to 5 pm and Sunday 10 am to 4 pm.
Always a great show, with so many talented artists. If you are looking for that very special something, for that very special someone - this is the show for you.
The Artful Dragon (me) will be participating in the show and I am looking forward to seeing everyone once more.
Check out all the artists on the Before the Rush web page at https://www.beforetherushshow.com
Happy Holidays!!

When I awoke at 5 am this morning and looked out of the window, the sun was a bright red ball on the horizon.  I jumped out of bed, dressed, grabbed my new (second hand) camera and headed for the car.  By the time I reached the river (1 minute) the sun had risen into the clouds but the red/orange glow remained.  Time for some Photos.  Now I took all of these on "auto" as I haven't worked out all the fancy settings yet and on top of that, I forgot to pick up the tripod, so all photos taken hand held. 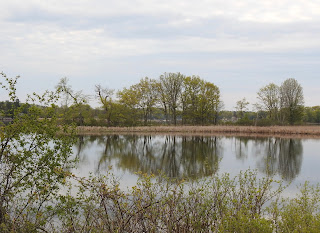 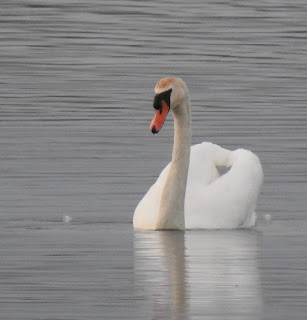 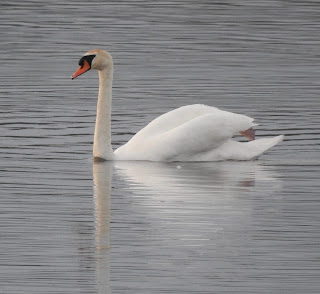 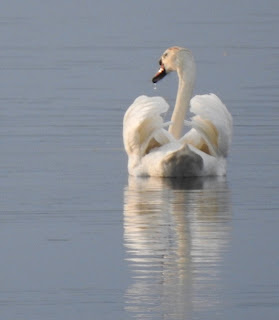 That's all for now.  (Note to self:  remember to pick up tripod.)   Time for coffee.  Looking forward to more photography, so stay tuned.
Lea

Yes, I am still creating, even though there are no shows to participate in at present.  But that is OK.

In the past I have enjoyed many different paper crafts and have quite a stash of paper supplies.  I decided to make some cards during my "staying home, staying safe" time and have enjoyed some of the new ideas I have seen.  The cards below are called "Pop and Twist".  As they open, the inner panel opens up and spreads out - love it!

The small pictures you can see in each of the four frames are Cigarette Cards.  These cards were popular in the early part of the 20th Century and came inserted in a packet of cigarettes.  People were encouraged to collect complete sets of different cards.

Information on each card is written on the back and it can be extracted by pulling on the piece of ribbon at the top. 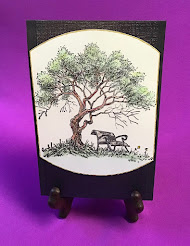 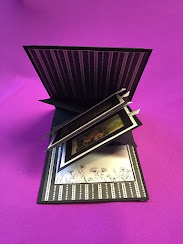 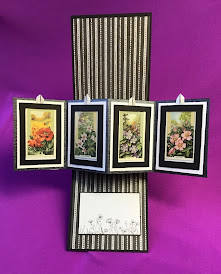 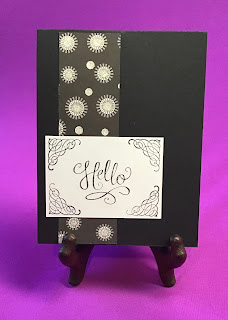 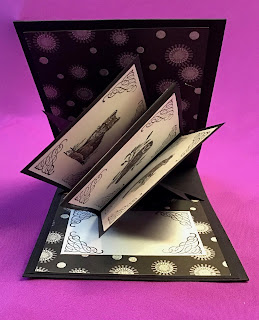 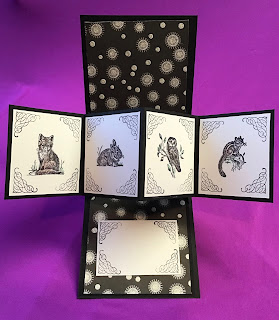 For this card, I used my wildlife stamps and then lightly coloured them.  We have all four of these delightful creatures here in our garden.
Next I created a Hexagon Tower Pop Up - much bigger!!!  One box leads to another and then a number of levels lead upwards to a small gift box.  Each level contains areas to put photos, quotes, messages etc.  This one is blank at the moment. 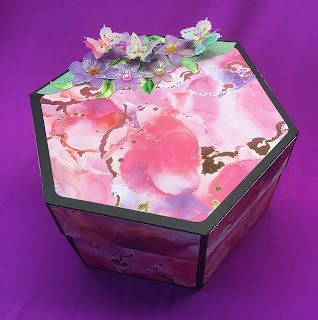 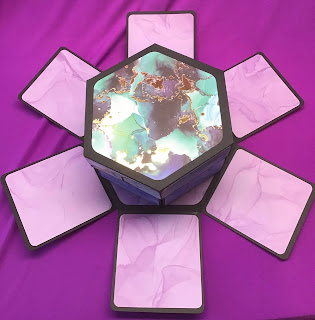 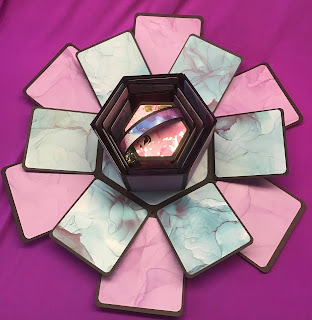 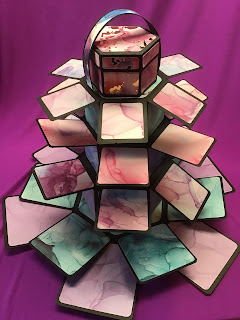 Finally, just a little more alcohol ink work with some cut and pierced metal accents.  A lot of my pieces have stories around them and this one is no exception.  I will keep it brief, but it goes a little like this.
This planet in a far away universe is inhabited by dragons, but sadly the planet is dying and will be gone in only a few more years.  The dragons have been searching for a new home to support their kind, but with little success.  Until, one day four of the bravest dragons found themselves in a nebula, which led them to a wormhole, which led them to a whole new universe, with millions of new planets to explore.  But as I usually say  "Now you have to make up the rest of the story for yourselves". 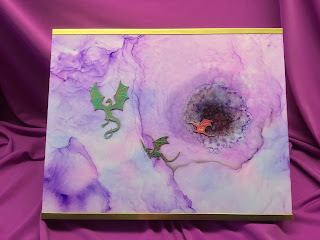 Well, friends, that is about all for now.  I have just had a new idea for a new card!!!!
Stay safe, enjoy the warmer weather.
Thanks for your interest in my work.
With kind regards
Lea

I am sure I do not have to tell you that 2020 was a very different year.  Life changed completely and we had to learn to live with the "new normal".  The Artful Dragon Studio did not participate in any of the usual shows until early November, when we very carefully set up the Before the Rush Show.

I have to admit that I was a little apprehensive to be around people again, but I found that all the visitors were very respectful and very happy to adhere to all the rules we had laid out.

During the Summer and Fall I spent a lot of time in my studio as a way of focussing on anything rather than Covid!  Because of this, I now have a lot of new pieces and hopefully will be able to show them sometime in 2021.

I also returned to a hobby I used to have many years ago - photography.  Back then, of course, we used a roll of film to capture the image.  I really love the digital age - delete, delete! This inspiration came to me from my Sister in Law - Megan Lorenz - who is an award winning wildlife photographer.  Megan has a way of making every animal look awesome.  I particularly love these two:

Take a look at some of the photos on her site and there is a lot of her merchandise available too.  Here is the link:  Megan Lorenz

There is no way I will ever be able to come up to Megan's standards, but we have a lot of birds in the garden and live just a couple of minutes from the St. Lawrence River in Ontario.  Lots of scope there!  Plus Megan is always there to answer my never ending questions. Thanks Megan.

My first photo that I was really pleased with is of one of our resident Blue Jay, who kindly sat still long enough for me to grab my camera and focus.  I think he is actually smiling, or it could be laughing at my confusion over which button to push! 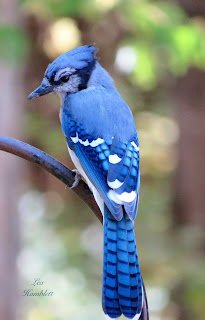 Then a Chickadee decided to follow suit and sat still for just a second.  They are just so quick! 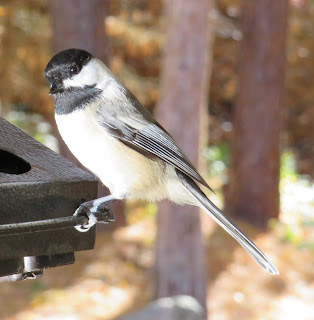 The real exciting day came when I was sitting in our sunroom and just happened to have my camera in my hand.  Suddenly, a hawk landed right in front of the window I was looking through.  He was certainly impressive. 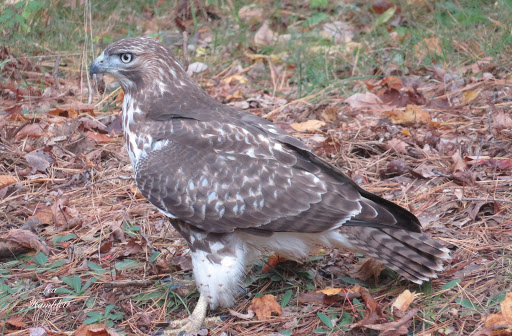 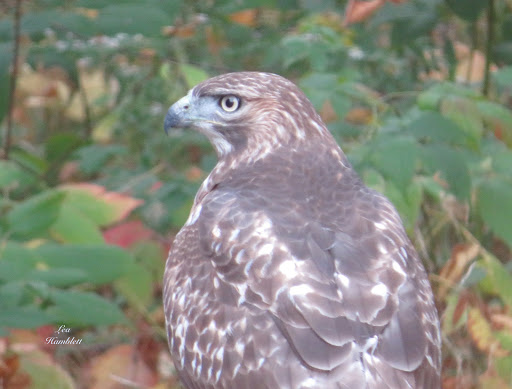 The eyes are so intense.
We saw him once a couple of weeks later, but nothing since then.
I have also been working on some more alcohol art, in 3D form.  I have begun to resin the smaller blocks to give them a beautiful glossy look.
The holiday season is almost over now and although we have snow, it was above freezing today.  There is still a lot of time before Spring arrives and my husband and I have switched over to playing our instruments (harp and guitar/cello.  We are hoping to record some of our new pieces.  Stay tuned.
That's just about all my news for now.  I wish you, your family a healthy and happy 2021.
Stay safe.
Lea
Posted by Artful Art and Music at 12:41

Since Covid began here, I have been staying home, staying safe.  Not the easiest thing to do, but totally necessary.  I have had a lot of time on my hands and have put that to use by working in my studio.

I have been trying new ideas with weaving Copper wire and have ended up with quite a lot of stock.  I must admit that I find the wire weaving quite meditative (when it is going well!!). 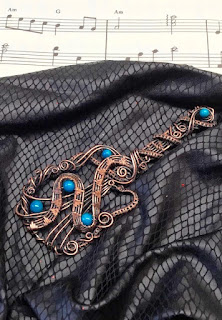 As my husband plays guitar, I decided to see if I could weave one. 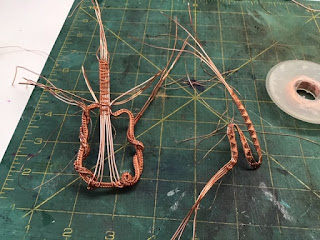 Although I did find myself with a number of difficult tangles to re-organise!! 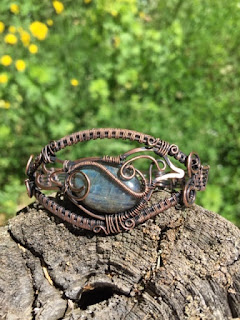 If you look closely, you will see that this cuff bracelet features a bird woven around a Labradorite cabochon. 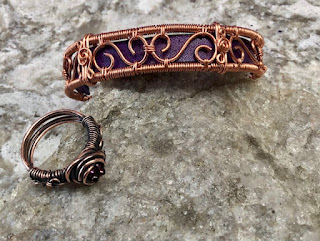 This cuff features a strip of purple leather as a background to the weaving and the ring has small purple beads in the centre.


I am sure I will be making many more pieces in the days to come and I will post photos soon.